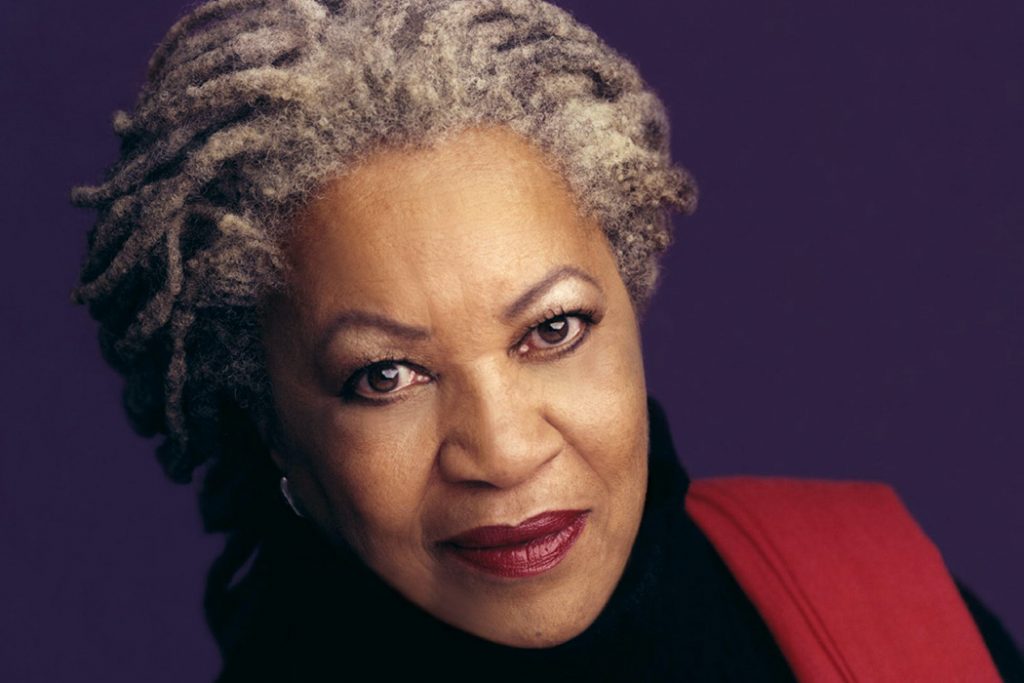 INSPIRATION:  the gift of breathing in that which sustains. That is what Toni Morrison has been for me since 1978. Apart from my mother and grandmothers, Toni Morrison stands as the woman who shaped my life in the profoundest of ways.

Her words first gave me air in what could have been a suffocating environment:  underground, deep in the stacks of Firestone Library (Princeton University’s hallowed repository of a great many things worth researching in the Seventies). Exploring—no, gasping—for something to stimulate my weary tentacles of scholarship, I was determined to find just the right breath. I searched for something that would feed my spirit as I tackled my biggest academic assignment to that date:  my junior independent study project.

As an undergraduate English (American Studies) major, I was both excited and terrified. Though excited to finally have the opportunity to inspect and dissect whatever interested me, I was terrified of being saddled with the usual, the expected. Knowing I didn’t want to deconstruct more “classic”/mainstream American literature, I turned to what spoke to me as a black student and writer—the canon of black fiction, that I had largely independently studied for most of my life. But, as I flipped through the card catalog, I didn’t feel led to stop at Baldwin, Ellison, Hansberry, Hughes, or Hurston. I kept flipping, until I found my breath, figuratively and literally.

“Morrison, Toni,” the cards read. The content sketches of her novels The Bluest Eye (1970), Sula (1973), and Song of Solomon (1977) hooked me immediately. That day I read as much as I could about the literary breeze that promised to make the impending months of intensive study not only livable but refreshing.

In the next couple of weeks, I inhaled Toni Morrison’s books, as if most of my other studies mattered little. After persuading my independent study advisor to allow me to devote my project to Ms. Morrison’s works, I set about the task as if it were light and love and air. Because, for me, it was:  I saw things, felt things, and breathed things I’d never experienced before. And that began a decades-long quest to summit the spirit of Toni Morrison.

Thirty years after my life-altering Morrison discovery, I attended the Fifth Biennial Conference of the Toni Morrison Society, in Charleston, South Carolina. One of the organization’s principals arranged for me to be in a small group gifted with a private introduction to and photo opportunity with Professor Morrison. I took my first moments in my hero’s presence to tell her she’d arrived at Princeton (as a professor) about ten years too late, according to my academic clock. (I’d graduated in 1980 and she’d arrived in 1989.) Then, breathing in the rare air of being so close to my writing idol, I must have become lightheaded, because I went on to explain to The Literary Behemoth herself that she had me to thank for Princeton’s first finding out about her. I said, “I introduced your work to the English Department.” Good-humoredly, her eyes seemed to say, “I have to hear this one.” So, I obliged. I recounted how, in 1978, I’d burst into my independent study advisor’s office and proclaimed that I’d be doing my project on the works of Toni Morrison. I explained to Professor Morrison that he’d quickly let me know just how the system worked:  the student requested and the advisor approved or refused.

I shared that my beloved advisor had politely said he had no idea who she was. Then I told her, “Before he could go on, I kicked into full PR mode:  ‘You haven’t heard of her?! But she received the National Book Critics Circle Award for Fiction last year and was just recognized at the White House just a few weeks ago.’” (I couldn’t remember exactly when she’d been honored at Pennsylvania Avenue, but “a few weeks ago” had worked for me.)

I shared with Ms. Morrison that after that bit of advocacy, my advisor said he’d be willing to learn more about her if I’d bring in her books so he could determine if they merited scholarly consideration. At that, Toni Morrison chuckled and flashed her trademark smile, “I’m not surprised (that the Princeton English Department hadn’t been abuzz about her, her work, or her noteworthy achievement); it’s so typical.” I moved along, charged by the current of electricity one feels after making positive contact with greatness.

That afternoon I arranged for Professor Morrison’s conference escort to present her with an acrostic poem I’d dared to create a few days before the event . . . a piece ABOUT . . . HER. No words can even hint at the level of trepidation I felt, when writing the piece for The Best Writer on the Planet AND after actually giving it to someone to deliver to her! The moment the poem left my hands, I quaked. So what if I’d spent days writing it. So what if it was beautifully matted and framed. This was NOBEL. LAUREATE. TONI. MORRISON. I was crazy.

Hours (that seemed like EONS) later the escort found me and said, “That poem you gave Professor Morrison must really be something.” She’d given it to her privately at her hotel just before setting out for the conference gala. The escort said, “Though we needed to leave, she stood there and took her time and read it. Several times, it seemed. Then she refused to leave it in the room. And stared at it in the car throughout the ride to the venue.”

I needed AIR. “Oh, my God,” I thought. The escort read terror in my eyes. “No, she looked like she really liked it,” she tried to settle me.

I sat smiling through the evening’s events. Happy that the single greatest influence on my writing life had seemed to like what I’d written. But, of course, I knew I’d always wonder what she’d really thought about the acrostic I’d painstakingly wrought to reflect her genius and the recurrent themes that characterize her body of work.

So, through divine intervention, I believe, I got the opportunity to find out. I looked up and spotted Professor Morrison walking across the room . . . alone. And, yes, despite heart palpitations and shaky knees, I wove my way through the space and stopped TONI MORRISON. In a fairly crowded room, I managed to suspend us both in a bubble of time, by gushing, “I’m the one who wrote the acrostic you received earlier tonight.” The smile that curled her lip and lit her eyes instantly connected us.

She exclaimed, “Oh, YOU’RE THE ONE who did the acrostic?! Those things are usually so forced, but not yours, and it has everything in it. It’s really well done. THANK YOU.” She rested a hand on mine as a brief underscore.

That “private” moment Professor Morrison granted me in the middle of a bustling conference room was OXYGEN. I’d directly shown my appreciation for the woman whose words had inspired me for 30 years and she had graciously received it. And, secondarily, the Greatest of All Time had validated the quality of my work.

Certainly, that was more than enough satisfaction for me. I was still awash in the afterglow of that encounter the next morning (the final of the conference) when the Society principals hosting Professor Morrison greeted me. Then, shockingly, one hailed me as “the only person we know of who has ever rendered TONI MORRISON speechless!” He went on to explain that the night before Ms. Morrison had shown them the piece I’d written and had admiringly referred to and gone over it a few times with them.

Over the years, I’ve held dear the highlights of that conference:  seeing Toni Morrison sit in on lectures about her work and modernism, taking a boat with Toni Morrison and a host of others to land at Sullivan’s Island to commemorate the first encounters with this land that enslaved ancestors of many African Americans experienced, and witnessing the placement of the Society’s first “bench by the road” as the simplest of interactive memorials to the enslaved.

But bearing the stamp of an icon’s validation tops them all.

(Yep . . . this is it, featuring every major theme of Toni Morrison’s body of work .)

A corporate trainer, inspirational speaker, and former instructor, Iris Formey Dawson ("IF") is a multidimensional word sculptor, who avoids cookie-cutter creation. Iris serves as a principal writer at The Formey Touch, a professional writing support collective rooted in her family’s passion for communications excellence. Some of Iris's pieces have appeared in Essence magazine and the Encyclopedia of the Harlem Renaissance, on MSNBC (which SCAD featured during its Presidential Conferment of Degrees and Presentation of Degrees ceremonies on May 28, 2021).
View all posts by Iris Formey Dawson →